Is The Fitbit Versa 3 Smartwatch Worth Buying? 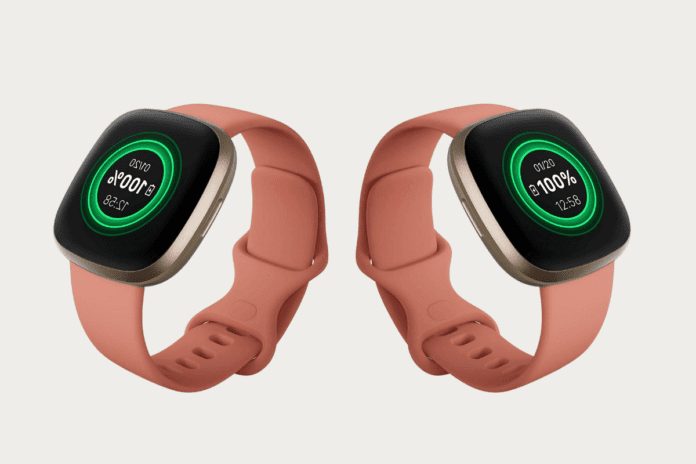 The Fitbit versa 3 newly added features honestly show that the company listens. They are clearly headed towards a direction that distinguishes them from another clone of the apple watch series. So if you are thinking of getting a good gadget outside the Apple ecosystem, the Fitbit versa 3 is just for you.

What is Fitbit Versa 3?

The Fitbit versa 3 is a health and fitness smartwatch with the features to monitor and track your active activities, sleeping patterns, SPO2, and much more. This version comes with a built-in GPS that allows you to explore outdoor activities without carrying your phone with you.

At first glance, it seems similar to the Fitbit versa 2, but on a closer look, it is a perfect square shape with curved edges in aluminium casing with a corning glass 3 and touches sensitive buttons on the side to make it swim proof.

On the backside, it has its charging connectors and heart rate sensors that flash green lights when in use. The Fitbit versa 3 comes with 2 lightweight interchangeable straps in different sizes and designs that can be easily changed with a button; it also has a magnetic charger that is placed under the  Fitbit versa 3, unlike the  Fitbit versa 2 that needs to be placed in a charging cradle.

The Fitbit versa 3 has a bright AMOLED touch screen with a 336px x 336px resolution in 1.59 inches wide and 1.59 long AMOLED display, so good lighting whether during the day or when you are going for a swim, would not be a problem.

The Fitbit versa 3 has an SPO2 sensor that reads your blood oxygen level while you are sleeping and gives an accurate and comprehensive report which is made available in your Fitbit app. However, this service comes with a premium membership subscription.

The Fitbit versa 3 has a heart rate monitor that tracks your heart rate during exercise, sleep and outside this period. With the active zone minutes feature, the watch alerts you when you reach your target heart rate zone, and it provides a comprehensive report and metrics to track your trends on your wellness, and it is available in the Fitbit app.

The Fitbit versa 3 has a sleep monitor that not only tracks your sleep but provides insightful sleep metrics like stages of sleep and gives sleep scores based on these metrics.

The Fitbit versa 3 provides an on-screen animated guide to help with your workout, including indoor or outdoor swimming.

The Fitbit versa 3 sets itself in the league of other expensive smartwatches with the new features rolled out, particularly the health features that track your heart rate, blood oxygen level and monitor your sleep patterns.

You can receive calls and notifications from apps like WhatsApp and give custom quick replies on Android but not with iPhone. The Fitbit app is also very user-friendly and easy to navigate for an average user, so you can seamlessly use other apps in the Fitbit store.

With the virtual assistant feature, you can use the google and amazon Alexa voice assistant to set reminders, get on-screen answers to your questions and check the weather.

You can opt to change the clock face to your preference or keep the display in a basic-face Always On mode if you need immediate access to your workouts stats, but this will decrease the Fitbit versa 3’s battery.

The Fitbit versa 3 is also water resistance for a depth of 50 meters so that you can go for an indoor or outdoor swim with your watch on you.

One of the main new features of the Fitbit versa 3 smartwatch is a battery life of 6 days when fully charged, but I would say you have a good five days, especially if you would be making use of it heavily or keeping it on the Always-on mode. It also comes with a quick charging cable that lasts up to 24 hours if charged for just 12 minutes.

You can play and store music and podcasts on Spotify, Pandora or Deezer; however, a premium subscription is required to use the music services.

The Fitbit versa 3 has a Bluetooth feature that you can connect to receive calls or initiate calls through the voice assistant. You can also connect other Bluetooth devices, but your phone has to be nearby.

And also, through the Fitbit app, you can seamlessly connect with apps in the Fitbit store. You also receive calls with your Fitbit and notifications from text messages apps where you can give custom quick replies on Android but not on iPhone.

The Fitbit has an in-built GPS that helps to track your route and gives you information on nearby routes available to you so that way you don’t have to go for a run with your phone on you. On the Fitbit versa 3 smartwatch, Google assistant and Alexa is built in so you can set reminders or ask about the weather and get a response which is super helpful if you need to go for a jog or a hike.

You also have the usual standard features like changing through the different clock faces available to your preference. There is also the always-on mode feature for easy accessibility to your stats, which would drain the battery life.

Nevertheless, if the SPO2 feature is of much importance to you, please bear in mind that the SPO2 only tracks when you are asleep, so you need to consider if that would be convenient for you.

Regardless of this, the Fitbit versa 3 works amazingly well but do not forget to take it off at intervals to rest your arms.

How much is the Fitbit versa 3?

On the Fitbit versa 3 website and amazon, the price usually ranges between $230 to $180 on promos for festive holidays.

Is the Fitbit versa 3 worth buying?

If you are looking for an advanced health and fitness smartwatch, the Fitbit versa 3 is definitely worth buying. It has all the features you would expect from a smartwatch you’ve bought for fitness.

It has impressive battery life. It tracks your workout routine, gives insightful stats and provides on-screen guidance. It monitors your heart rate, breathing rate and sleeps with comprehensive reports to identify trends and indicate the areas that need attention and change.

The Fitbit versa 3 makes workouts more fun with various playlists to pick from. Its inbuilt Gps and voice assistant (Google Assistant, Amazon Alexa) works together to provide a user-friendly experience. Buying the Fitbit versa 3 would be a wise choice to get an affordable smartwatch that is not just a clone of other existing smartwatches.

The Fitbit versa 3 newly integrated features is a step closer to ensuring the smartwatch can be used seamlessly without the need for the phone, and it is indeed smart. A smartwatch for fitness that does not require the constant use of your phone and works with the goal to improve my fitness and wellness is indeed a smart, wise investment.

Should you be considering buying the Fitbit versa 3? This health and fitness smartwatch is one of its kind.

I hope you find this review helpful? If yes, please share your thoughts in the comment section below.

Is the Fitbit versa 3 waterproof/water-resistance?

The Fitbit versa 3 is water-resistant, but for just a depth of 50 meters, so this is not the watch if you are going to be deep diving.

Can the Fitbit versa 3 make calls?

The Fitbit versa 3 can be used to initiate calls with the inbuilt microphone and speaker.

What does a Fitbit versa 3 do?

It is a health and fitness smartwatch that monitors your heart rate, sleep and blood oxygen level. It tracks your daily routine, calculates steps taken, calories burned and active zone minutes.

Facebook
Twitter
Pinterest
WhatsApp
Previous article
Apple iPad 2021 Review: Discover All You To Know About The Tablet
Next article
Is The Apple Watch Series 6 Smartwatch Worth Buying? Here Are Factors To Consider