What is the Best Laptop under 300 Dollars? Here are 3 Affordable Laptops to Consider 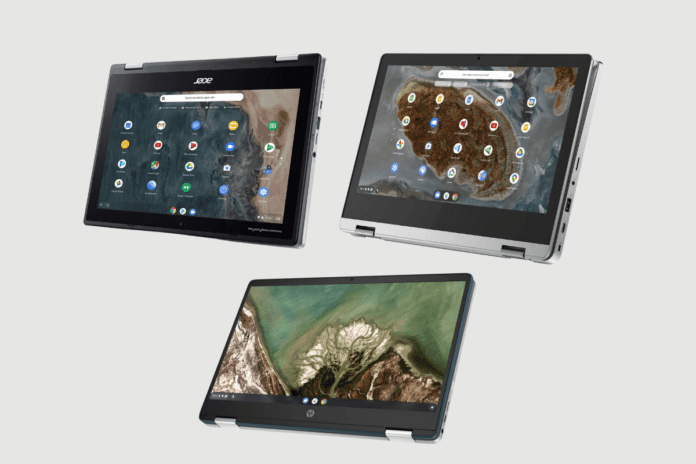 Finding the best laptop under 300 dollars can be sometimes difficult, especially if you need one with decent performance. Currently, there are many different brands, models, and features that can be included in this price range, but not all of the brands come with good performance that will serve beyond just average use.

In this article about the best laptop under 300 dollars, I will be discussing my three picks of the 3 best affordable laptops under $300.

It runs on a Chrome OS which is designed by Google to make it browser-based, cloud-powered and ensure it boots quickly to allow seamless connection to the internet.

The dimension is 32.600 x 220.00 x 18.00 (H x W x D)  and the Keyboard is a back well-lit keyboard with white keys but this might be a challenge if you are using it in a bright room. The trackpad clicks well and the scrolling is pretty responsive.

On the left side are the 3.5-millimetre headphone jack and a USB type-c port for charging while on the right side is a micro Sd card slot and a USB type-a port. The connectivity option is the Bluetooth ,the USB ports and 802.11 a/b/g/n/ac Wi-Fi.

The Hp x360 14a Chromebook has a 720p HD webcam with a dual microphone system which would be good for zoom meetings, online classes or video conferences. It comes in ceramic white, forest teal or mineral silver.

The Lenovo Chromebook Flex 3 is a very flexible and portable laptop with a plastic build that costs less than 300 dollars. It uses a dual-core Intel Celeron processor and has a storage space of 64GB with 4GB RAM which is fair for its price point.

On both sides, there are the USB ports with a 3.5-millimetre headphone jack powered by dual 2-watt speakers and at the top, it has a 720 HD 720p webcam. It also has a mouse trackpad, keyboard and the battery life is supposed to last 11 hours.

The screen is about 11.6 inches wide with a screen resolution of 1366 by 720. The Lenovo Chromebook Flex 3 has a touch screen that is pretty responsive to gestures and they factor in the 2-in-1 functionality because you can turn the Chromebook all the way around to use it as a tablet.

Although it might be a bit heavy to use as a tablet because it weighs 1.12 kg in that mode but it is still useful if you are constantly on the move because of the versatility and flexibility to use as a PC and a tablet.

The Acer Chromebook Spin 311 is an excellent low budget Chromebook that retails less than 300 dollars. It uses an Intel Celeron n4000 processor with a speed of 1.1 gigahertz and the processor handles Intel UHD graphics cards.

The octa-core processor according to ACER Chromebook Spin 311 website should have enough processing power to get you through the day no matter where it is taken.

The Acer Chromebook Spin 311 runs on Chrome OS which is designed by Google to make it browser-based, cloud-powered and ensure it boots quickly to allow seamless connection to the internet. It also has MU-MIMO ( Multi-User Multiple -Input and Multiple -Output) features that allow faster wireless speeds when multiple wireless devices are connected.

On the left side, we have the headphone jack, a micro Sd slot, a USB type-a and a USB type C that doubles as the charging port. The screen is an 11.6 inch HD display screen with a resolution of 1000 by 768O.

The touch screen and trackpad are also pretty responsive to gestures. It has a storage space of 64GB with a Ram of 4GB and the battery life is supposed to last 10 hours.

The Acer Chromebook is also a 360-degree flexible laptop which means it can serve as a tablet or a PC and it weighs 1.05 kg which makes it really easy to carry around campus or the workplace at your convenience.

In terms of connectivity and functionality, the Acer Chromebook can connect with other devices through the USB-C port or through the 802.11ac Gigabit Wi-Fi with 4.2 Bluetooth and it would be good for online classes, attending zoom classes with the 720 p HD webcam and even gaming although storage space might be a hinder.

The Hp x 360 14a Chromebook, Lenovo Chromebook Flex 3, 2-1 and Acer Chromebook Spin 311 are some of the best Chromebook laptops under 300 dollars that would serve you well if you are on a tight budget and although they do not have advanced Intel Core processors or handle integrated intel UHD graphics cards and mostly limited to a Ram of 4GB.

They are always durable with very good battery life and would get the most basic job done well. Even if you are not on a tight budget but need a laptop to do the most basic things like attending an online meeting or watching movies, these laptops are good options.

Facebook
Twitter
Pinterest
WhatsApp
Previous article
Huawei Watch GT 2 Pro Smartwatch Review: Is this Smart Watch Worth Buying?
Next article
What is the Use of the Huawei Band 6 Smartwatch?

12 Best Headphones For Gaming: How Do They Compare?

5 Best Amazfit Smartwatches: Are These Watches Worth It?